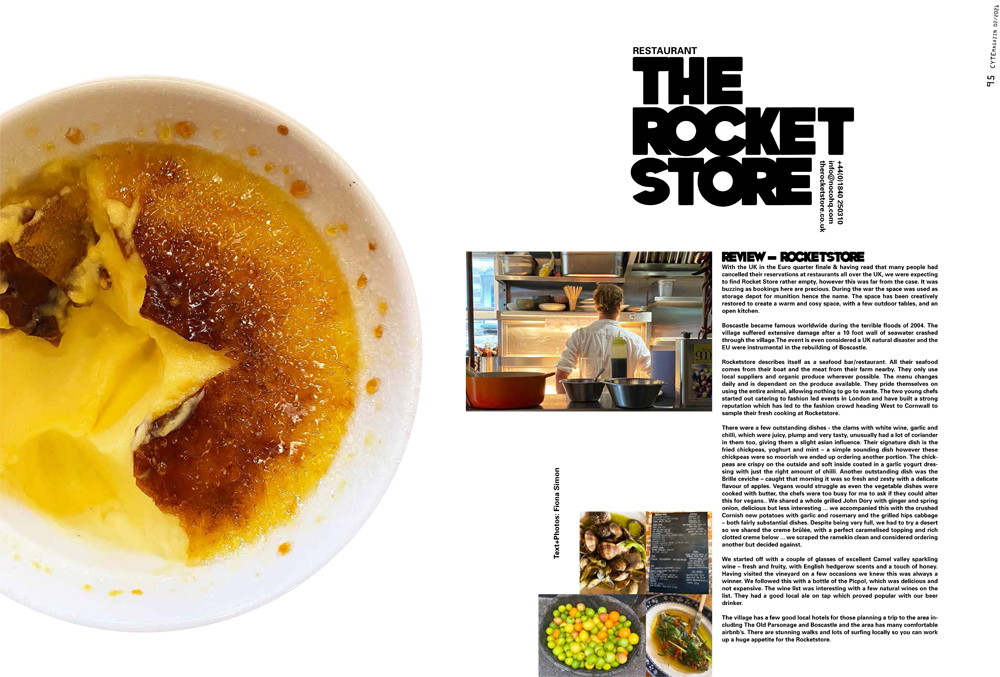 With the UK in the Euro quarter finale & having read that many people had cancelled their
reservations at restaurants all over the UK, we were expecting to find Rocket Store rather empty,
however this was far from the case. It was buzzing as bookings here are precious. During the war
the space was used as storage depot for munition hence the name. The space has been
creatively restored to create a warm and cosy space, with a few outdoor tables, and an open
kitchen.
Boscastle became famous worldwide during the terrible floods of 2004. The village suffered
extensive damage after a 10 foot wall of seawater crashed through the village.The event is even
considered a UK natural disaster and the EU were instrumental in the rebuilding of Boscastle.
Rocketstore describes itself as a seafood bar/ restaurant. All their seafood comes from their boat
and the meat from their farm nearby. They only use local suppliers and organic produce wherever
possible. The menu changes daily and is dependant on the produce available. They pride
themselves on using the entire animal, allowing nothing to go to waste. The two young chefs
started out catering to fashion led events in London and have built a strong reputation which has
led to the fashion crowd heading West to Cornwall to sample their fresh cooking at Rocketsore.
There were a few outstanding dishes – the clams with white wine, garlic and chilli, which were
juicy, plump and very tasty, unusually had a lot of coriander in them too, giving them a slight
asian influence. Their signature dish is the fried chickpeas, yoghurt and mint – a simple sounding
dish however these chickpeas were so moorish we ended up ordering another portion..The
chickpeas are crispy on the outside and soft inside coated in a garlic yogurt dressing with just the
right amount of chilli. Another outstanding dish was the Brille ceviche – caught that morning it was
so fresh and zesty with a delicate flavour of apples.. Vegans would struggle as even the vegetable
dishes were cooked with butter, the chefs were too busy for me to ask if they could alter this for
vegans.. We shared a whole grilled John Dory with ginger and spring onion, delicious but less
interesting.. we accompanied this with the crushed Cornish new potatoes with garlic and
rosemary and the grilled hips cabbage – both fairly substantial dishes..
Despite being very full, we had to try a desert so we shared the creme brûlée, with a perfect
caramelised topping and rich clotted creme below.. we scraped the ramekin clean and considered
ordering another but decided against.
We started off with a couple of glasses of excellent Camel valley sparkling wine – fresh and fruity,
with English hedgerow scents and a touch of honey. Having visited the vineyard on a few
occasions we knew this was always a winner. We followed this with a bottle of the Picpol, which
was delicious and not expensive. The wine list was interesting with a few natural wines on the list.
They had a good local ale on tap which proved popular with our beer drinker..
The village has a few good local hotels for those planning a trip to the area including The Old
Parsonage and Boscastle and the area has many comfortable airbnb’s. There are stunning walks
and lots of surfing locally so you can work up a huge appetite for the Rocketstore.