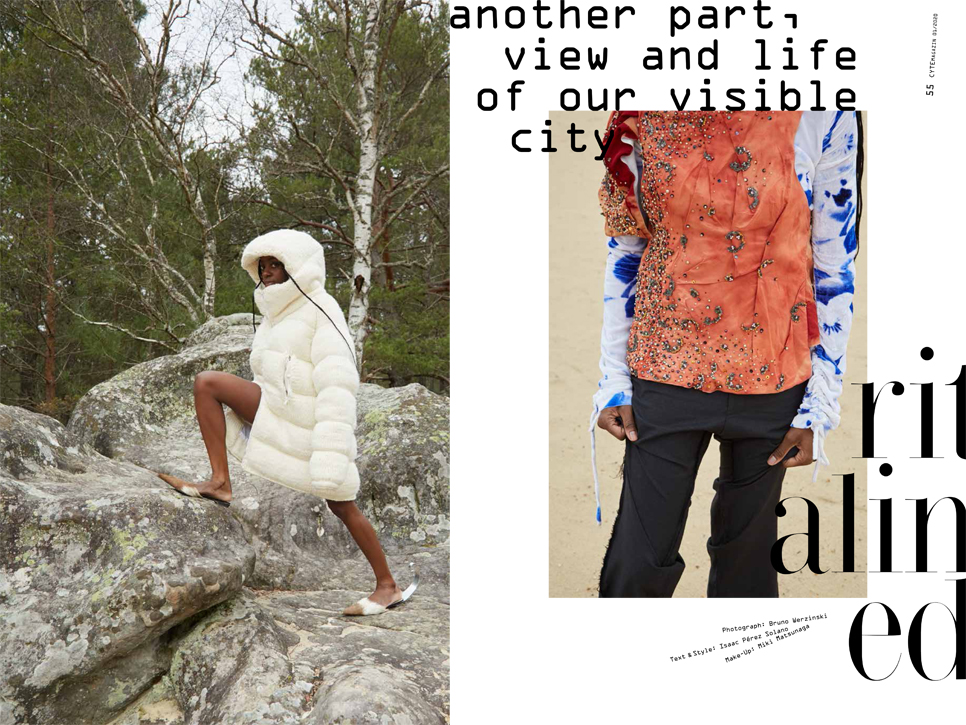 talents of fashion, art and music.

After working with young designers for the LVMH prize and Not Just a Label,

she started scouting the best graduates for her own agency.

With her strong eye, she spots talents at graduation shows, by word of mouth or on her travels, when she checks stores for the local talents.

to their ideas and break in with their proposals. 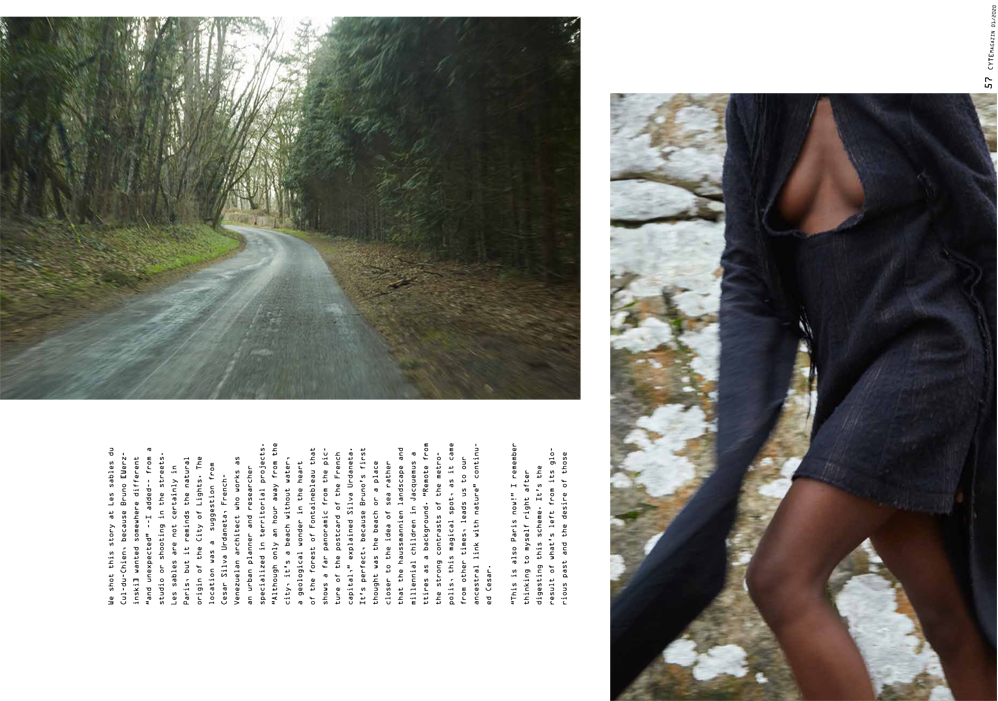 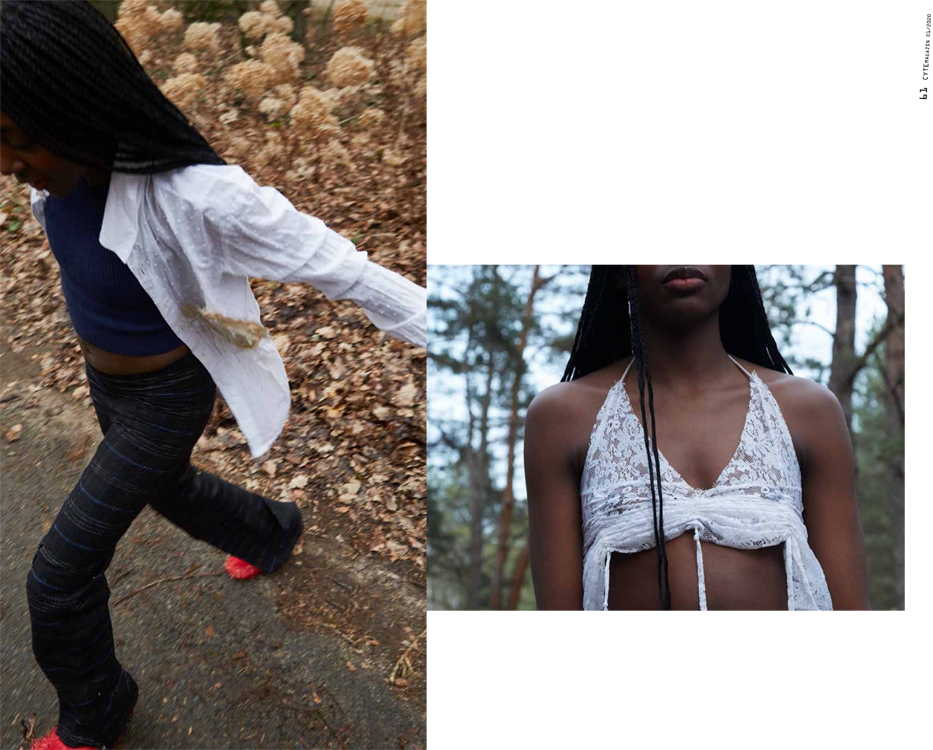 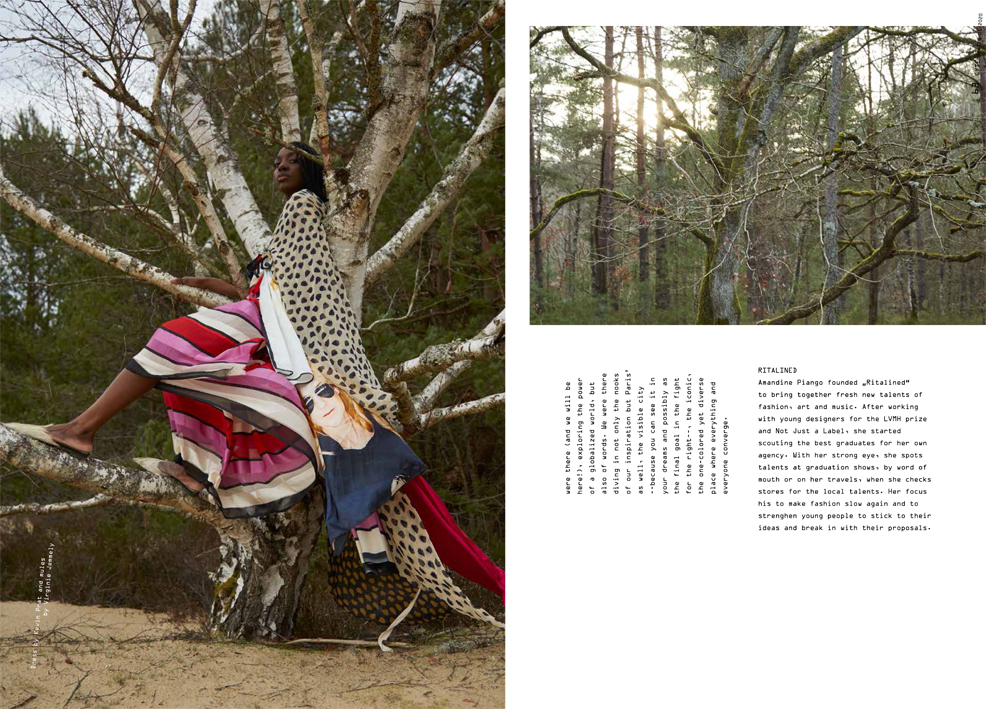 Another part, view and life of Our Visible City

We shot this story at Les sables du Cul-du-Chien, because Bruno [Werzinski] wanted somewhere different “and unexpected” –I added– from a studio or shooting in the streets. Les sables are not certainly in Paris, but it reminds the natural origin of the City of Lights. The location was a suggestion from Cesar Silva Urdaneta, French-Venezuelan architect who works as an urban planner and researcher specialized in territorial projects. “Although only an hour away from the city, it’s a beach without water, a geological wonder in the heart of the forest of Fontainebleau that shows a far panoramic from the picture of the postcard of the French capital,” explained Silva Urdaneta. It’s perfect, because Bruno’s first thought was the beach or a place closer to the idea of sea rather that the haussmannien landscape and millennial children in Jacquemus attires as a background. “Remote from the strong contrasts of the metropolis, this magical spot, as it came from other times, leads us to our ancestral link with nature” continued Cesar.

“This is also Paris now!” I remember thinking to myself right after digesting this scheme. It’s the result of what’s left from its glorious past and the desire of those who want to make history in the near and far future, like the protagonist of our story: Amandine Piango, founder of Ritalined, the “experimental communication agency”, as Piango claims it. I sold to Bruno the concept of the natural set, a space for recreation and freedom. “In a reservation like this lies the potential of the parisian metropolis, in the anchoring of its wholesome a vast natural structure that although diminished, highlights the extraordinary origin of the city that we live in today, the one that fertile plains, rivers and tangled forests gave birth,” as the architect told me a weekend before our shoot.

We were there, creating a narrative in four different accents, playing with our desire of newness and with the new, with the different, with the diverse like the pieces from Lucille Thieves, Lyks, Virginie Jemmely, among other special designers.

It was Joan Didio in Slouching Towards Bethlehem (1968) who first made me realize that certain places seem to exist mainly because someone has written about them. “A place belongs forever to whoever claims it hardest, remembers it most obsessively, wrenches it from itself, shapes it, renders it, loves it so radically that he remakes it in his own image.” This is exactly what Amandine is doing with her sixth sense and with the brands that she’s carrying under her long black braided hair and witty personality, scouting creatives eager to really break the mold. So, If Kilimanjaro belongs to Ernest Heminway, Oxford, Mississippi, belongs to William Faulkner; then Paris is falling for Amandine Piango.

Like a modern poem to this city and those who want to know more of what makes it burn in 2020… we were there (and we will be here!), exploring the power of a globalized world, but also of words. We were there diving in not only the nooks of our inspiration but Paris’ as well, the visible city –because you can see it in your dreams and possibly as the final goal in the fight for the right–, the iconic, the one-colored yet diverse place where everything and everyone converge.