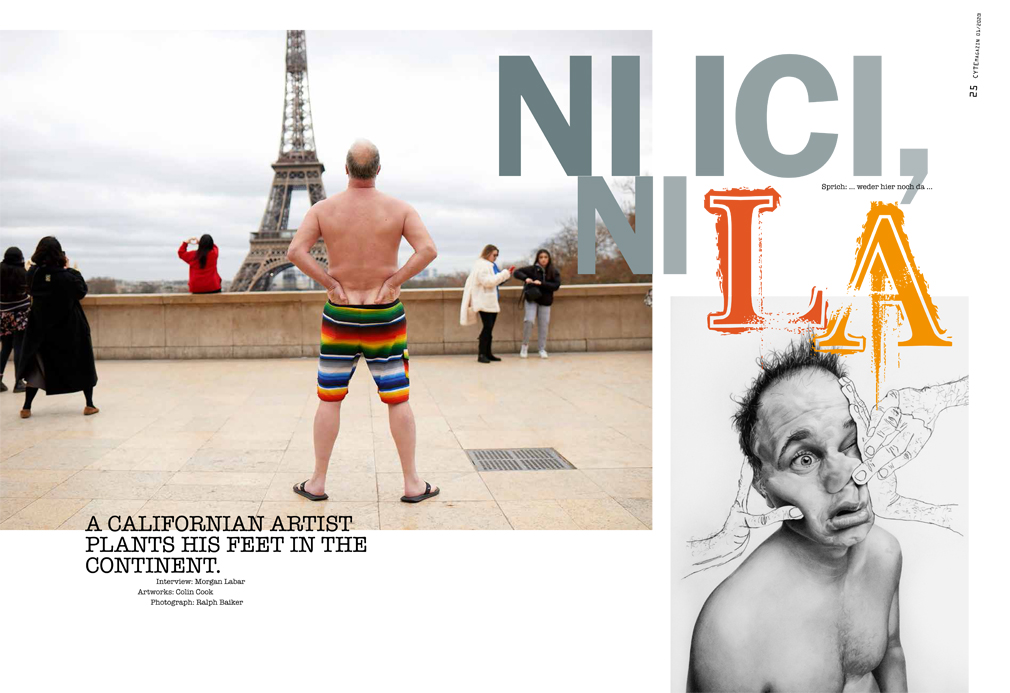 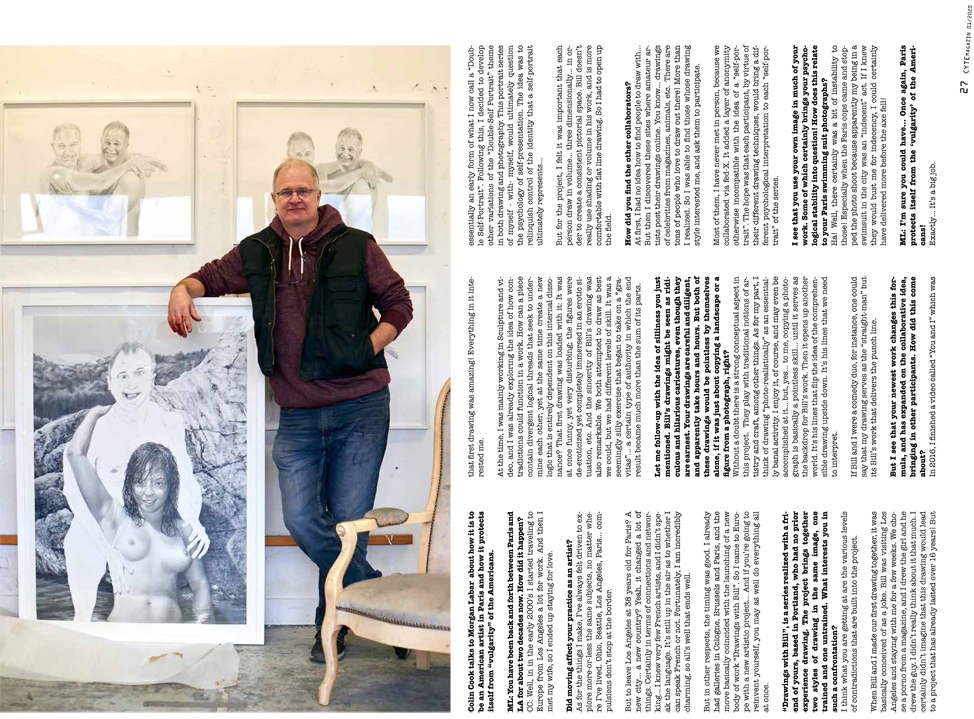 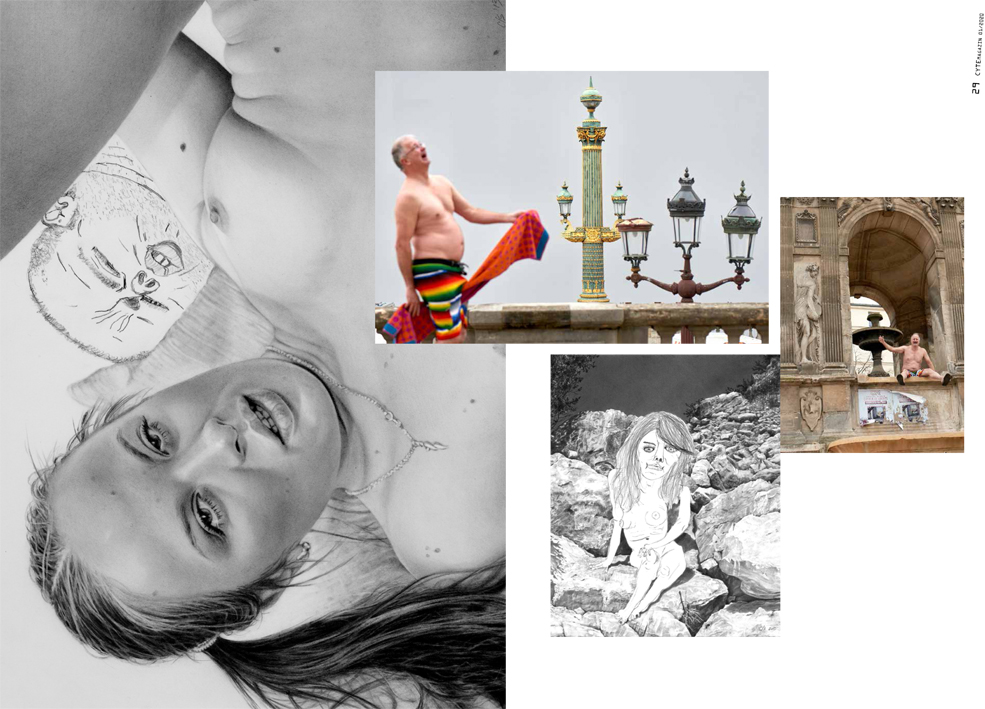 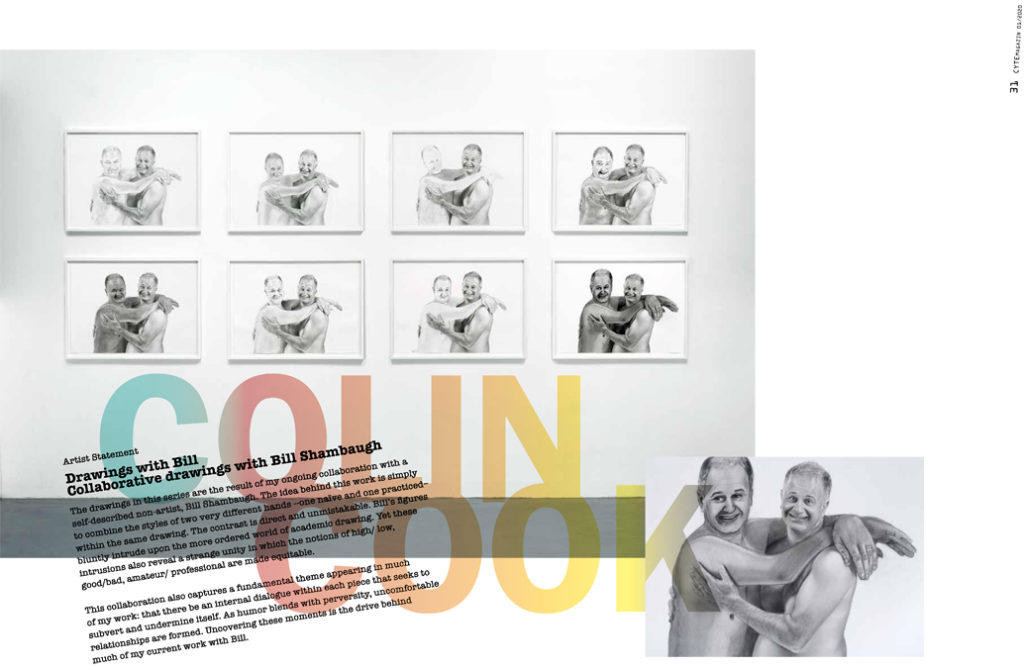 A CALIFORNIAN ARTIST PLANTS HIS FEET IN THE CONTINENT.

Colin Cook talks to Morgan Labar  about how it is to be an American artist in Paris and how it protects itself from “vulgarity” of the Americans.

ML: You have been back and forth between Paris and LA for about two decades now. How did it happen?

CC: Well, in in the early 2000’s I started traveling to Europe from Los Angeles a lot for work. And then I met my wife, so I ended up staying for love.

ML: Did moving affect your practice as an artist?

CC: As for the things I make, I’ve always felt driven to explore more-or-less the same subjects, no matter where I’ve lived. Ohio, Seattle, Los Angeles, Paris… compulsions don’t stop at the border.

But to leave Los Angeles at 38 years old for Paris? A new city… a new country? Yeah, it changed a lot of things. Certainly in terms of connections and networking… I knew very few French artists, and I didn’t speak the language. It’s still up in the air as to whether I can speak French or not. Fortunately, I am incredibly charming, so all’s well that ends well.

But in other respects, the timing was good. I already had galleries in Cologne, Brussels and Paris, and the move basically coincided with the launching of a new body of work “Drawings with Bill”. So I came to Europe with a new artistic project… And if you’re going to reinvent yourself, you may as well do everything all at once.

ML: “Drawings with Bill”, is a series realized with a friend of yours, based in Portland, who had no prior experience drawing. The project brings together two styles of drawing in the same image, one trained and one untrained. What interests you in such a confrontation?

CC: I think what you are getting at are the various levels of contradictions that are built into the project.

At the time, I was mainly working in Sculpture and video, and I was already exploring the idea of how contradictions could function in a work. How can a piece contain divergent logical threads that seek to undermine each other, yet at the same time create a new logic that is entirely dependent on this internal dissonance? That first drawing was loaded with it: It was at once funny, yet very disturbing; the figures were de-eroticized yet completely immersed in an erotic situation, etc. And the sincerity of Bill’s drawing was also remarkable. We both attempted to draw as best we could, but we had different levels of skill. It was a seemingly silly exercise that began to take on a “gravitas”… a certain type of authority in which the end result became much more than the sum of its parts.

ML: Let me follow-up with the idea of silliness you just mentioned. Bill’s drawings might be seen as ridiculous and hilarious caricatures, even though they are earnest. Your drawings are careful and diligent, and apparently take hours and hours. But both of these drawings would be pointless by themselves alone, if it was just about copying a landscape or a figure from a photograph, right?

CC: Without a doubt there is a strong conceptual aspect in this project.  They play with traditional notions of artistry and craft, among other things. As for my part, I think of drawing “photo-realistically” as an essentially banal activity. I enjoy it, of course, and may even be accomplished at it… but, yes… to me, copying a photograph is basically a pointless skill… until it serves as the backdrop for Bill’s work. Then it opens up another world. It’s his lines that flip the idea of the comprehensible drawing upside down. It’s his lines that we need to interpret.

If Bill and I were a comedy duo, for instance, one could say that my drawing serves as the “straight-man” but its Bill’s work that delivers the punch line.

ML: But I see that your newest work changes this formula, and has expanded on the collaborative idea, bringing in other participants. How did this come about?

CC: In 2016, I finished a video called “You and I” which was essentially an early form of what I now call a “Double Self-Portrait”.  Following this, I decided to develop other variations of the “Double-Self Portrait” theme in both drawing and photography. This portrait series of myself – with- myself, would ultimately question the psychology of self-presentation. The idea was to relinquish control of the identity that a self-portrait ultimately represents…

But for the project, I felt it was important that each person draw in volume… three dimensionally… in order to create a consistent pictorial space. Bill doesn’t really use shading or volume in his work, and is more comfortable with flat line drawing. So I had to open up the field.

ML: How did you find the other collaborators?

At first, I had no idea how to find people to draw with… But then I discovered these sites where amateur artists post their drawings online. You know… drawings of celebrities from magazines, animals, etc.  There are tons of people who love to draw out there! More than I realized. So I was able to find those whose drawing style interested me, and ask them to participate.

Most of them, I have never met in person, because we collaborated via fed-X. It added a layer of anonymity otherwise incompatible with the idea of a “self-portrait”. The hope was that each participant, by virtue of their different drawing techniques, would bring a different psychological interpretation to each “self-portrait” of the series.

ML: I see that you use your own image in much of your work. Some of which certainly brings your psychological stability into question! How does this relate to your Paris swimming suit photographs?

Ha! Well, there certainly was a bit of instability to those! Especially when the Paris cops came and stopped the photo shoot because apparently my being in a swimsuit in the city was an “indecent” act. If I knew they would bust me for indecency, I could certainly have delivered more before the axe fell!

ML: I’m sure you could have… Once again, Paris protects itself from the ‘vulgarity’ of the Americans!

The drawings in this series are the result of my ongoing collaboration with a self-described non-artist, Bill Shambaugh. The idea behind this work is simply to combine the styles of two very different hands –one naïve and one practiced– within the same drawing. The contrast is direct and unmistakable. Bill’s figures bluntly intrude upon the more ordered world of academic drawing. Yet these intrusions also reveal a strange unity in which the notions of high/ low, good/ bad, amateur/ professional are made equitable.

This collaboration also captures a fundamental theme appearing in much of my work: that there be an internal dialogue within each piece that seeks to subvert and undermine itself. As humor blends with perversity, uncomfortable relationships are formed. Uncovering these moments is the drive behind much of my current work with Bill.